But right now, I’m personally the most excited about the new Mature Students campaign DIUS is kicking off in partnership with The Student Room and Directgov: 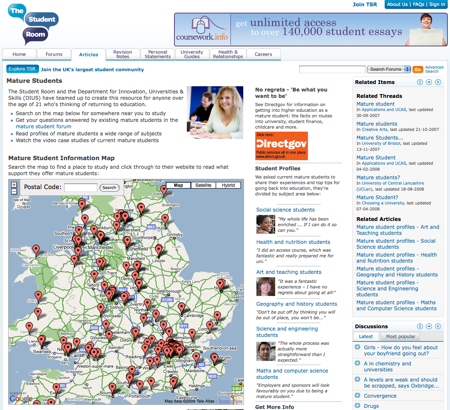 Recommendation 1 of the PoI Taskforce Report challenges public servants to involve themselves in user-led communities:

As a matter of course, public servants should be active in online peer support forums concerned with their areas of work, be it education specialists in parenting forums or doctors in health forums.

There have been some good examples of ministers engaging with online communities as part of consultations, notably Lord Darzi and Netmums as part his Review, as well as the semi-formal partnerships for discussion we set up alongside the New Opportunities white paper. But more sustained engagement with these forums is still a rarity, despite the fact that communities’ interests and those of government are often very well aligned.

DIUS’ new Mature Students campaign aims to provide information, advice and guidance to people considering returning to education but facing the challenges of childcare, finance or the cultural aspects of student life. Research shows that mature students are particularly likely to look for university options near home, so local options are important. Some of this information existed already on Directgov, but the softer peer support is not really in the scope of the Directgov brand proposition. Under web convergence rules, creating a new microsite was a no-no. Enter The Student Room.

TSR has over 100,000 members and some 8 million posts in its forums, managed by an crack team of volunteer moderators (n.b. eagle-eyed readers will raise an eyebrow at the banner ad for coursework essays; TSR work with exam boards to stamp out plagiarism). With so many users, a small but significant chunk of them mature students, they’re a great partner for the campaign. And with a platform more flexible than Directgov’s in terms of functionality and proposition based squarely on peer support, they provide the perfect companion to Directgov’s official, credible information.

We learned some valuable lessons from the process of working together:

The project came in on time, on budget (four figures rather than five for the web components), and from where I was sitting, was one of the most painless web projects I’ve ever been involved with. Kudos to Jamie and Warren at The Student Room, Sam, Justin & Jacq at DIUS, Stephen & Graham from the DIUS Education & Learning Directgov franchise and the team at Consolidated PR. The year of the 4th Sector Pathfinders

3 comments on “Going where the people are”