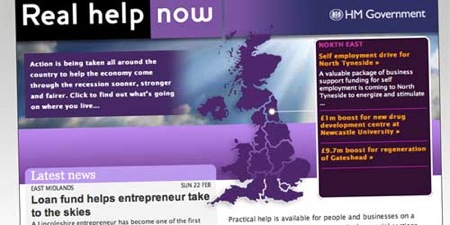 As Simon Dickson and Dave Briggs have written up, today has seen the launch of a new site aimed at bringing together a range of information and help under the banner of Real Help Now, which I’ve been helping with.

So far, there’s not much to say, as Simon says:

We aren’t making any great claims for this site: it is what it is, a pretty front end, courtesy of regular collaborator Jonathan Harris, pointing to other people’s material, plus a (first person) message from the Prime Minister. But if it can establish itself, there’s naturally plenty of scope to extend and expand into something more communicative and interactive.

Technically, it’s a very interesting piece of work by Simon, using the cloud as its CMS, via tagged items from Delicious and YouTube. And trying to arrange hosting has convinced me that we really need a small-scale centralised hosting and systems administration service for Government. We’ve also collectively learned that cacheing Delicious feeds on high traffic sites is definitely the way to go – but that working with a small supplier, you can get that kind of glitch fixed in minutes, rather than days.

But as others have pointed out, the site currently just aggregates information from elsewhere. I understand the site will be enhanced over the coming weeks, so there’s an opportunity now to contribute ideas to what the nascent Real Help Now could become. So what could Government, citizens and business do with the social web to come through the recession in better shape?

How could it work as a viable channel for feedback to government about local problems and solutions? What sort of partners should the site engage with to widen its reach and increase its value? How can the social web widen understanding of and input into the momentous macroeconomic decisions we’re making as a country seemingly every day? What kind of online peer support and information sharing could generate real benefit – and what role does Government have if any to facilitate that online?

One comment on “Where next for Real Help Now?”