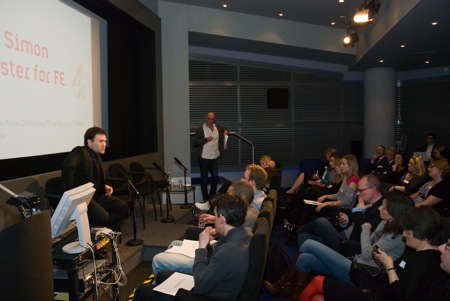 Today DIUS and Becta held a conference hosted by Channel 4 in London under the banner “All Together Now: Delivering Further Education in an era of mass participation“. The event was for policy makers, FE professionals and providers to consider the implications and potential of this new wave of media and technology innovation, learn from the people who have been pioneering their use and network, debate and develop how they could be used to enrich the learner experience in FE. Props to  Michelle and Lucy in particular along with Steve and the Becta crew for their hard work putting together a great day.

It was primarily about immersion and challenge. As our minister Sion Simon put it, it reflected the fact that government should learn from the people who know better than we do what young people are doing with these tools:

The core online platform was a Ning group set up by Becta to share materials from the event and continue the discussion. Ning is a great and flexible tool, which served us well on the day.

For my team – under the expert tutelage of Dave Briggs – this event was a good opportunity to practice our social reporting skills, and apply a number of different approaches to see what works best for us. Specifically, we were looking at capturing pictures and video from the event, cover some of the main themes and sessions in blog form, try out some podcasting and cover the event on Twitter for those unable to be there. We’ll debrief as a team and review tomorrow, but my topline reflections were:

Is social reporting just a rather self-indulgent pursuit in these straitened times? I don’t think it is – we did a lot of things right today and can learn some useful tips and tricks for the future to help ensure we get more value out of events like this, ensuring that more people can benefit both during and afterwards. And it’s rather fun too. State of social media & online PR in the UK 5 comments on “A spot of social reporting: what I learned”