Forgive me a slight deviation from the usual fare here: I’m just back from my summer holiday to Italy and wanted to share a couple of tips on travelling by train to Europe:

The truly revolutionary thing about the internet isn’t that it enables millions of people to crowdsource information, but that it enables truly passionate, expert oddballs such as the amazing Mark Smith to publish resources like the The Man in Seat Sixty One. A former station manager and civil servant, Mark has travelled the railways of the world, documenting not only how they work but the timetables and minutiae of the experience on each train service. He gave us the idea of getting from Bromley to Umbria via Paris and Rome using a combination of five trains. Take a look at the site, and dream of 3-week treks across Asia on the Trans-Siberian railway, or getting to Botswana by train. Sometimes, it’s nice not being a student any more. For an extra twenty quid on the ticket price, I really recommend upgrading to Eurostar’s Leisure Select service. You get better-than-airplane food, a lot more space, peace and quiet, and if travelling with young children, help from the steward to move you to a table by yourself, if there’s space available: Arthur loved crawling around the Eurostar cabin.

Tip #3: Travelling by train is really rather fun
You don’t have to be the rail minister to enjoy travelling by train. I’m no trainspotter, but I really loved exploring Japan via Shinkansen a couple of years ago (which reminds me: another tip) – the smoothness, reliability and buttock-clenching speed were, well, buttock-clenching. Coming back from Italy this time, we got on a sleeper train in Florence at 9pm after a day of ice creams and sightseeing, woke up to croissants and coffee as we arrived in Paris at 9am the next morning, and were home by 3pm after a leisurely return journey – it really made it part of the holiday. And in our two-berth compartment, I got to sleep in the top bunk I never had (as a only child). Bliss. 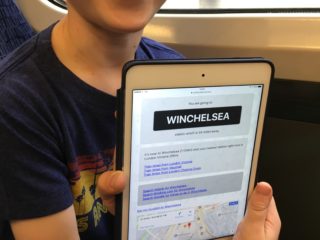 The Traindomiser: a train adventure