The thinking goes: the old fashioned press release, with its carefully-crafted marketing-speak, stilted quotes and page or two of text is on the way out. First, the intended audience (journalists) don’t trust the content. Second, it doesn’t fit with the multimedia format of broadcast and online news. Third, in an age of blogging and citizen journalism, there’s a wider audience out there for the raw information sans spin.

The Social Media News Release (SMNR) updates the old press notice and video news release for a social media age. Factual bullet points instead of marketingese. Embedded video and images for media outlets and bloggers to use. Social bookmarking buttons to help users to spread the word. Related documents and context to help the lazy or time-poor to put the report in context. 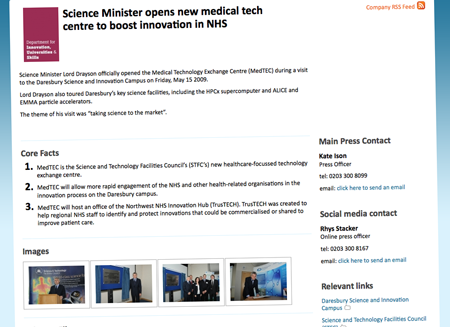 I think there’s a real opportunity for government press officers here: by preparing more engaging news releases, we can give stretched media organisations the raw materials they need to cover public sector stories, help set the context of our programmes and announcements, and strengthen trust in government as a source of authoritative, credible information. The example of the H1N1 swine flu materials published by the US Center for Disease Control is a rather nice one, complete with embeddable widgets.

Rather haphazardly, I’ve been trying to do the same for some of the launches I’ve worked on. Early attempts were very basic. A more recent effort (with more planning) was a bit more comprehensive. But now, I’ve got the luxury of piloting it properly, with Rhys Stacker – a former DIUS press officer and talented photographer – and Elliot Reuben at the helm.

Naively, I initially thought we could write a spec for a software tool to help us deliver SMNRs, and roll it out. It quickly became clear that actually, there are more cultural change and technical obstacles involved in preparing, creating, publishing, promoting and assessing SMNRs than I first realised. There seem to be four main challenges:

We’re trying out PressItt, a free hosted SMNR service, which Rhys used today to collate an SMNR about our minister’s opening of a new research facility – complete with high resolution images and a podcast of the minister’s speech. To my mind, it’s an impressive effort – simply converting and publishing the various components. And it’s step forward from our first attempt, which featured video clips of the launch of DIUS’ Learning Revolution – but which took 3 days to finally edit and publish.

This is still a relatively new and untested area of digital engagement for UK government, so we’re still feeling our way through successfully completing the process itself, let alone successful outcomes from it. But to my mind, that’s exactly where we should be, hence my documenting our baby steps.

Learnings so far? Planning is everything: know what we can capture, and line up the people and gear to do it. Editing and uploading takes time. Busy press officers can’t realistically take this on as a new responsibility – it needs dedicated focus and expertise, at least for now. Promotion is tricky – tools like Social Media Library offer the promise of helping us target the right bloggers and tweeters alongside our corporate channels, but it’s too soon to tell what really works. The process is getting quicker with practice: while brands like Ford have produced impressive SMNRs, they’re focussing on big product launches, rather than the types of regular events and publications we’re currently aiming to cover in this way.

We’ll keep on trying, and seeing what works, and look forward to feedback and suggestions as we go.