Imagine – hypothetically – you go to work on a Friday morning, and by 5pm (after a busy day of coffee and muffins), your organisation technically doesn’t exist any more.

After the initial flurry of rebranding, you decide you need a holding website of some sort, to tell people about the newly-branded organisation while you sort out the heavy wiring.

Puffbox’s work for the Wales Office showed that WordPress can handle simple corporate government sites. My own experience with it on our Science and Society consultation convinced me it worked well as a mini-CMS as well as a blog, and that it’s flexible enough to re-engineer into something quite different as and when you need it.

So the new digital management at BIS are predictably rather keen on WordPress, both from the former BERR and DIUS sides. When we decided as a group on Monday lunchtime that a holding site was the way forward, we had a rough wireframe together within the hour, a fairly robust approach to hosting in train that afternoon, and a working prototype site in WordPress within about 12 hours. From idea to live site took less than 72 hours, including signoffs – a thoroughly enjoyable collaboration between former DIUS and BERR people, led by Neil. 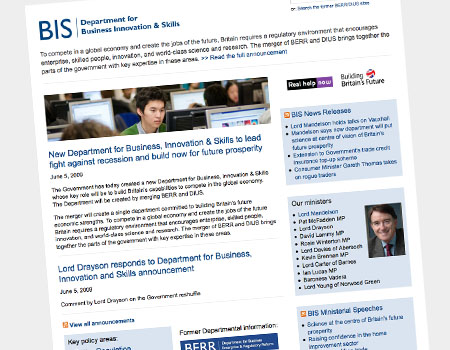 bis.gov.uk is explicitly a holding site while we sort out the back end infrastructure. It’s got branding, press releases and an about page, but a few nice extras too:

Starting with WordPress accelerates the development process massively. Find a theme close enough to the wireframe (in our case, Straightforward), and then just tweak styles and templates. Because it’s WordPress, you have built-in RSS for everything (e.g. our announcements), full site search, helpful categorisation and tagging, and widgets to make your sidebars easy to populate with HTML and incoming RSS feeds.

Dapper + Pipes: I wanted to get two sets of speeches into a single RSS feed. Snag: one of the sites doesn’t have a speeches RSS feed (and neither – outrageously – does our new NDS press releases page). Dapper to the rescue: create a new Dapp, point it at the speeches listing page, click on the parts of the page which compose the RSS feed fields, and Dapper generates the RSS feed for you. With Pipes, you can merge two feeds into one, and sort them by date. A WordPress widget then displays the latest items from the combined feed in your sidebar. It’s the beauty of that Heath-Robinson combination of disruptive tools that I find so exciting; a seemingly impossible task takes about 15 minutes.

Civil Service Jobs Online: the cross-government recruitment site was quick to rebrand BIS jobs, and their API lets you get structured XML from their database. So with less than a hundred lines of PHP (<- feel free to use and adapt however you wish), we can get all the BIS jobs they list, generate an RSS feed or simple web page list, and put it into a WordPress sidebar widget. Lovely.

Google Custom Search Engine: two legacy websites mean two separate sets of searches, right? Not with a Google Custom Search Engine. Like Dave Briggs’ LGSearch which searches local authority sites, in about 5 minutes you can set up a bespoke version of Google which returns results from just the sites you want – in this case DIUS and BERR. Their new AJAX widget displays them on-site in a rather neat way.

FriendFeed: Though rebranding Twitter accounts was thankfully fairly quick, it’ll take us a little while to get round to fully merging two sets of social media channels. For now, Friendfeed lets us set up a simple way of aggregating all the BERR, DIUS and now BIS channel content in a simple way with aggregated RSS feeds.

It won’t win any design awards, and the downside to Heath Robinson web development will no doubt be some quirks in reliability. But happily, we can say we haven’t spent a penny on external web development or licencing costs, and we got something up within 3 days. Compared to the static, hand-coded site DIUS had for the first 18 months of its life, it’s a start, and a little bit innovative too. 27 comments on “Hold the front page”