When the National Pandemic Flu Service launched last week, it was always going to be big. As it transpired, the demand was massive, beyond even what the developers had predicted with over 2,000 requests a second for the homepage.

When I checked the site later that day (for professional reasons), I was surprised. To be clear: I don’t really know how or why the site looks as it does: I’ve not been involved in that to date, and there’s always internal politics, a technical backstory and a team doing their best behind every government website. But as a lay outsider I started thinking: in a fantasy scenario, how would I have done it?

For me, the brief would be:

So here are my before and after mockups (you’ll see I’m no designer, but hopefully you’ll get the idea): 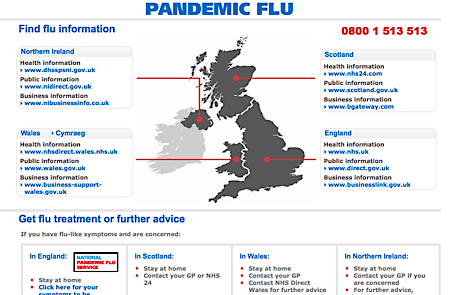 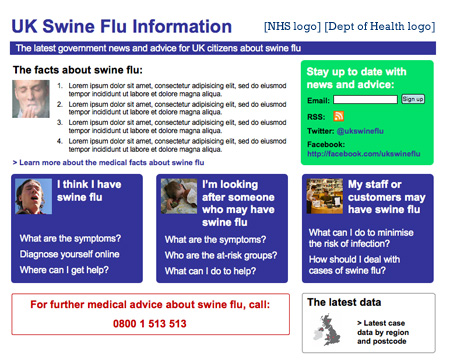 As I say, this was just a quick exercise in user-centred design – very much in a personal capacity. How would you have done it?

UPDATE: After I wrote this, I stumbled across the US flu.gov and @flugov on Twitter. The design is, ahem, basic (in fact, I didn’t believe it was an official site at first), but we’ve come to similar conclusions about strategy: email signup, use of Twitter, publishing of data and FAQ-type content.

UPDATE 2: I’ve replaced the mockup which used Dept of Health and NHS logos with a version which doesn’t – to be clear, I’m not implying any link between this website and official information on swine flu.

The rules of Intranet Club 17 comments on “The user experience of swine flu online”