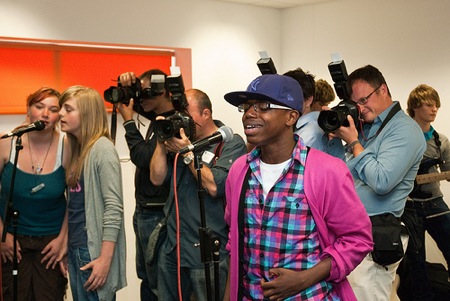 The Civil Service Guidance on Propriety sets out the role for civil servants in communicating the policies of the Government:

It defines some principles for government communication, specifying that it:

So I’m really proud of what the team achieved today in support of explaining a controversial area of government policy using modern methods and at low cost. Accompanying Lord Mandelson and Ben Bradshaw’s visit to the BRIT school in Croydon to put the other side of the peer-to-peer file-sharing debate, the guys created a multimedia package that takes the press notice and tells an interesting policy story. What’s more, it was live on Flickr, YouTube, Twitter and the corporate website within 4 hours as one of our new-style hybrid stories/multimedia resource pages.

Combined with the Digital Britain Forum blog’s discussion of the file-sharing issue, I think this makes an interesting and little-heard case for a policy, through digital media. I think that’s what government information in the 21st century is about.

2 comments on “Government information in the 21st century”