At Reboot Britain earlier this year, I did a short talk on the direction of online consultation, and mused that the future would be about:

Today at work, the team are launching a couple of projects which I think take us a step onwards in our journey towards better consultation. 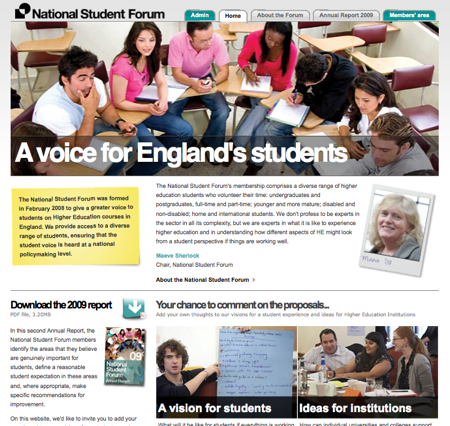 Thanks to Puffbox working with Jenny Poole at BIS, the Annual Report of the National Student Forum, the independent group of students advising ministers on student issues, has a rather nice new website. I think he built it in SharePoint or something.

It’s a sign of the direction we’re tending towards in commentable documents, based on our experience to date. Our first foray, Innovation Nation, took the executive summary of a document and made it commentable. Subsequent projects took whole documents – one epic example running to 245 printed pages – and made them commentable. We’ve learned two things: (i) concise documents seem to work better; and (ii) specific and action-oriented texts seem to elicit more engagement. So for the NSF’s report, we’ve pulled out just two areas – one a set of visions for students, the other a set of issues for universities and colleges to consider – and opened these up for discussion (with some rather nice Scribd integration Simon developed). It’s a nice-looking site, good value and turned round quickly. [n.b. why the .com URL, you convergence-minded people ask? We’ll be working with the Forum on convergence in due course, but bringing their site into the fold seemed a good first step, given their unusual status and a challenging timescale]. 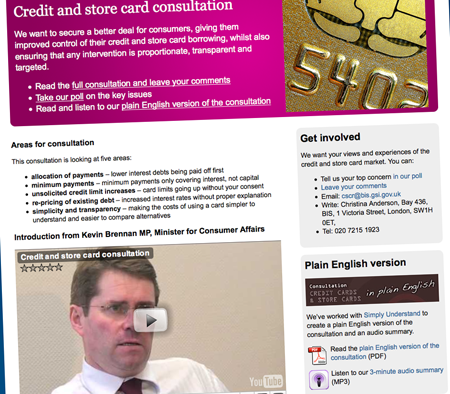 The second launch follows up the Prime Minister’s weekend podcast where he outlined plans to address sharp practices by some credit and store card companies. The new credit and store card consultation is explicitly about raising awareness as well as seeking new ideas from stakeholders and consumers. So working with the policy team, we’ve come up with a layered consultation that hopefully brings the issues to life:

The work from Simply Understand is simply outstanding. For a very small consideration, they’ve produced something which is clear, elegant and more impressively still, does justice to the original and keeps the policy authors on-side – Corinne has shown it can be done.

There’s some interesting online engagement around the consultation too, from the launch on GMTV by MoneySavingExpert‘s Martyn Lewis co-ordinated by the Press Office to the discussion thread in MoneySupermarket.com, taking the discussion out to where credit card users are already talking. It’s been a really good team effort, led by Alistair Reid, with support from Rhys Stacker and Michael Morgan and the Consumer Policy team.

It would be great to hear feedback and suggestions as always, and ideas for where we might go next. If you’ve run commentable consultations yourself, what did you learn from them? The pieces of the digital engagement puzzle