If there’s one thing Barack Obama taught us about the power of digital by the manner of his election, it’s that email still counts (and, for that matter, still works when you’re in government). For a while, I’ve been determined to focus more on how we use email as a corporate communication channel, particularly in the context of needing to justify why establishing new websites often isn’t a good idea. 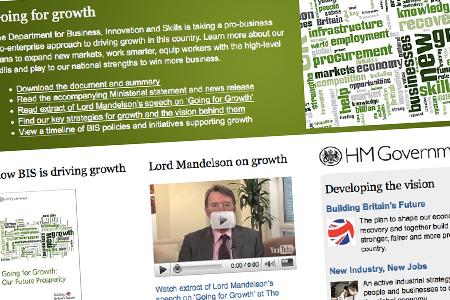 We launched a project at work today that’s hopefully a step in the right direction: a kind of souped-up landing page for our new strategy for supporting economic growth, Going for Growth.

We’re probably not alone in having a few big policy themes which embrace a multitude of announcements, speeches and initiatives. The challenge for digital communications – well, for all communications, I suppose – is bringing these big themes out in ways our audiences can understand, and not losing the wood for the trees. Even on our own small interim site, thematic information is scattered across press releases, speeches and policy pages, making it hard to explain the drivers of policy, the history or the direction it’s going in.

This time, the initial request was for a new ‘portal’ but it quickly became clear that an aggregator would be a better fit for the content, audience and the commissioning team, who would be moving on to other things after delivery. So the page we built is designed to:

Our corporate site is WordPress-based (for now) but the page template itself is really little more than a shell. What’s interesting is what WordPress makes possible through its flexible RSS-with-everything approach and knock-yourself-out unrestricted approach to templating. But the interesting stuff happens elsewhere. 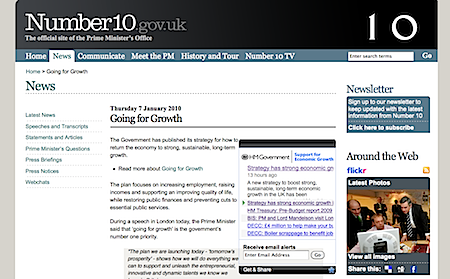 The site was still put together, in-house (kudos for this project to Jenny, Michael, David and Rhys), fairly rapidly to meet a moving target, and there’s still plenty of work for us to do. The list of email subscriptions offered to you via the widget still needs tidying up; we still haven’t quite provided the killer resource for media that I’d hoped to I think; and though it’s less of a nightmare than an independent microsite to manage, it’s still likely to be headache to migrate across to a new CMS.

But we’ll keep tweaking, and with this low-cost patchwork of tools, hopefully we’ll nudge closer over time towards the goal of a truly engaging, useful and workable channel for policy news. 14 comments on “The Audacity of Growth”