When DIUS launched its Science and Society consultation in July 2008, I took the opportunity to throw the kitchen sink at a consultation, digitally-speaking. Not all of it worked (in fact, hardly any of it did, you could argue), but I learned some useful lessons and the policy team have maintained their appetite for engaging online. My first proper WordPress site long outlived its intended lifespan, continuing as a blog with a bunch of pages for expert groups of scientists to continue their deliberations in public.

But as these things do, the limitations of one-thing-turned-into-another became more apparent over time, and it became clear it was time for a rebuild. We’re putting that live today. 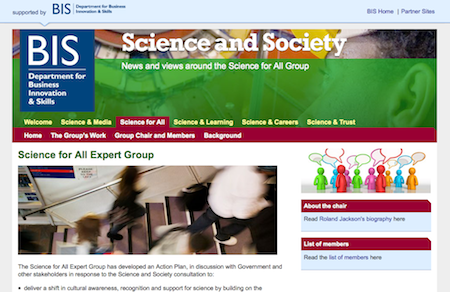 Simon Dickson of Puffbox has done a nice job on the project, cleverly deploying WordPress multi-user to host a set of linked blogs for the groups, with a unifying homepage and RSS feed. It’s a good fit for the job, enabling the secretariats to the groups to manage their own presence, post up minutes and draft reports, and use WordPress widgets to promote special announcements.

But there may be the makings of a more profound point here – which Simon has made to me before with a curious smile – about government web platforms of the future. I’ve been asked a few times over the last month or so ‘How large can a WordPress site be and still be workable?’. I’ve tended to suggest, perhaps, 500 pages as a workable limit, unable to conceive of managing complex content trees and thousands of pages in a tool built for blogging.

But will the government websites of 2015 need to look like the behemoths of today? In departments where policy is key, stakeholders need to be involved and where ‘whats new?’ is the primary question users ask, could the departmental sites of the future be a series of linked blogs, written by enfranchised and enlightened policy officials, engaged with by stakeholders, and summarised on new lifestream-style corporate homepages supported by a meaty document and data library search and solid archiving?

I’m not pretending this site is the future here and now. But it’s an interesting thought.

Oh, and watch that curious blue bar at the top. There’ll be plenty more of that if Neil gets his way.

Update: Simon blogs his part of the story

Update 2: I failed to mention in the original post that Jenny project managed this project, keeping a tricky internal supplier (i.e. me) on course. Thanks Jen. 24 comments on “One day, all this will be blogs”