It’s Ada Lovelace Day, an international day of blogging to draw attention to the achievements of women in technology and science, and I’ve taken the pledge to write about a female heroine of science or technology.

My everyday heroine is Marilyn Booth, a civil servant, working in Science & Society policy in a central government department not a million miles from my own. To my knowledge, Marilyn’s not discovered any new elements, won many Nobel prizes or authored many W3C specifications (though I could be wrong). But she’s at the forefront of a revolution that should and must happen if government is to start engaging online in any meaningful way. 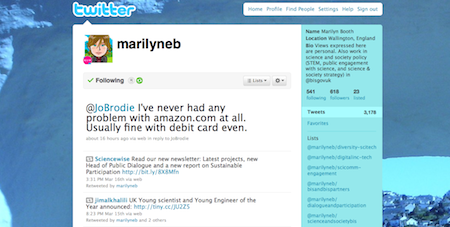 Marilyn tweets, about her work and her life. She retweets eminent scientists and stakeholders, including the minister and the department’s official channels, and has built up a 600-strong following. She runs a Facebook group, helping promote the work of her team, long after its original intended purpose was concluded. She sets up stakeholder events in Second Life that would terrify me, logistics alone. She uses low cost web tools like Eventbrite to manage events, saving taxpayers thousands of pounds a time. The bottom line is, she has her ear to the ground, knows her stakeholder audience well, thinks laterally and courageously about how to use the new tools, and won’t be thwarted by the limitations of corporate IT.

It’s great for government departments to set up social media channels and talk to their audiences in new ways. It’s even better when ministers and senior officials take the plunge personally. And it’s critically important that people in my kind of role walk the talk.

But we’ll only change the way government works when bureaucrats deep in the bowels of policy departments take the step of using them regularly and for professional purposes. When they know who’s influential and interesting beyond the formal steering group, and informally involve them in solving public policy problems in the open. Soon, that won’t be the difficult and at times brave step that it is today. For now, three cheers for the Marilyns showing us the way.