The public sector has been paying lip service to the idea of achieving ‘more for less’ for several months now, whilst in many cases conceding that the end result is inevitably less for less. This week, Neil Williams and his team at BIS showed that there’s a way to deliver something better whilst spending less than they did before. And they did it twice. 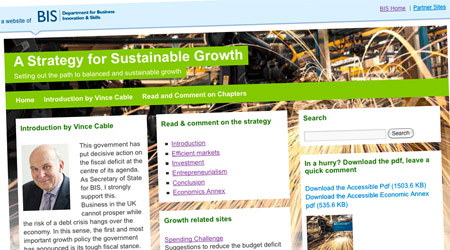 There’s clearly still enthusiasm in government for engaging citizens, service users and civil society in policy development, ensuring that people have an opportunity to comment and contribute. In the past, BIS would have met this requirement by developing new sites – albeit using low-cost technologies – sometimes in-house and sometimes using external developers. Each project cost was small, but the marginal cost was proportionately high. Wheels, reinvented.

Jenny and Neil commissioned me to update the work I previously did on a WordPress theme for commentable documents, Commentariat, but with the twist that they wanted a platform they could deploy entirely in-house not just for the project in hand, but for future projects,  without buying-in technical skills each time.

Commentariat2 is the result as seen in BIS’ Growth and Skills strategies. In Jenny’s words:

We’ve been making a selection of consultations and key documents commentable for while now for a variety of reasons: to engage new audiences, create debate, dialogue and awareness around policy changes, reach niche audiences who have a wealth of expertise to share with us and each other etc.. Seems to be working because policy colleagues now come to us with expectation that we can deliver this and they don’t ask “Why should I?” but “What’s the best way to do this?”

We were also feeling the pinch of the financial pressures not to outsource web development. I felt that on the one hand we had lost contractors and fixed term staff with technical skills and on the other hand we are expected to do more work in-house. So I feel genuinely empowered by this: conversations with colleagues are no longer slanted by whether they’ll have to pay for it or whether we can turn it around.

I won’t go into massive technical detail about the platform now, except to say watch this space. In a nutshell, using the user-friendly features of WordPress 3.0 and some customised extras, Jenny and colleagues now have a tool ready to go for almost any document that gets thrown at them, and can make the kind of changes to look and feel that previously required freelance help. It’s possible I’ve not thought this through…

But arguably the more significant launch of the week Neil has blogged about on his site. Quietly, Neil and his team have built an enterprise-strength shared hosting platform and commercial model for BIS and its extended family of partners using SiteCore and Eduserv. So when the Skills Funding Agency was launched, the marginal cost of their new website was tiny. And when the Export Credit Guarantee Department needed a new infrastructure, the BIS platform was a no-brainer. And so on, and so on, including this week the British Hallmarking Council perhaps the nicest looking of the partner sites so far. As I commented on his post:

When converging sites, it’s fairly easy to skin-and-link (as it’s known in the trade), or just hack an old site down to a few pages within the parent CMS, but this approach delivers a site with its own identity, which meets all government rules at low cost, and which gives the BHC folk a platform to do their own digital engagement.

It’s also nice because it creates a sense of partnership and common endeavour between a Whitehall department web team and its partners, pooling development and training costs, using skills more effectively and hopefully establishing a common respect for the different roles and styles of different public sector organisations.

Truly, more for less. Neil and his crew should be on commission.

The pieces of the digital engagement puzzle

9 comments on “What does more for less look like?”