It’s been interesting to see the development of the UK Government’s first major forays into crowdsourcing, in the form of HM Treasury’s Spending Challenge, the drive for cost-saving ideas,  and Your Freedom, a mechanism for proposing unnecessary regulation to be repealed. But even more impressive is the approach being taken in the US with Challenge.gov, taking crowdsourcing an important step further. 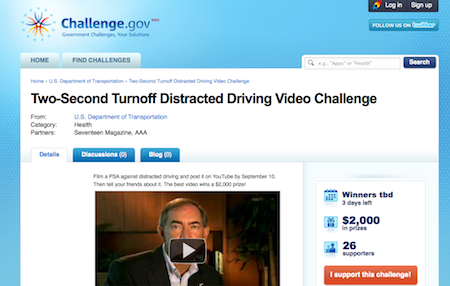 On this platform, people are invited not to submit ideas, but to work with others to develop solutions to problems that need solving, and with cash behind them. Sometimes, these are serious industry-changing propositions; sometimes, they’re clever marketing in another form, like this competition from the Department of Transportation to source videos designed to warn people of the dangers of distracted driving.

The UK experiments have been different: more about ideas than their implementation – the closing press release identified three ideas being taken forward by Government in order to save money. And that’s fine, but there’s a missed opportunity to mobilise the effort and enthusiasm of thousands in the cause of problems they could help to solve, not just identify.

But can the crowd really deliver? And should they?

First, let’s unpack ‘the crowd’. The Spending Challenge smartly called for submissions from public sector workers first, and then opened its doors to the public after a couple of weeks. In fact, the ‘crowd’ here comprises a number of groups:

It’s unlikely that members of the general public will, on average, have the skills or data to deliver reform of NHS procurement, say (and neither, for that matter, would a local councillor). But from the ideas and data provided by the public and the NHS itself, between them representatives of service users, suppliers, the service managers, and interested economists might.

But for suppliers or front line workers to determine where the cuts should fall is turkeys and Christmas territory, surely? Quite possibly. But there’s more to crowdsourcing than setting priorities. For instance, there are jobs to do to:

It feels wrong – sort of anti-democratic – to leave priority-setting to a self-appointed committee of vested interests, even if those people are well-intentioned. But a representative general public crowd can’t manage the implementation of good ideas – even citizen’s juries don’t attempt to do that.

Importantly, crowdsourcing understood this way isn’t voting, and representativeness is just one factor, alongside:

At some point in every innovation project – government or commercial – ideas have to meet the machine – that’s how products and services get delivered, and policies get made.

The brave but rarely successful history of attempts to change how and when ideas encounter it – from bringing in entrepreneurs as ministers, to appointing service user reps on policy-making committees – points to the need for a smoother, genuinely Big Society, process for turning ideas into reality. It’s human nature to want to work on your own projects, rather than those imposed upon you. It’s human nature to want to earn recognition, intellectual satisfaction and a good living from your work. So instead of asking civil servants to sift thousands of ideas and assign half a dozen to people around Whitehall to ‘take forward’, why not put proper money behind a few big challenges, and support civil servants, frontline staff and whoever-the-hell-wants-to to band together to spend time and money solving them?

I say that Your Freedom and the Spending Challenge were some of the UK Government’s first forays into crowdsourcing, but of course, that’s not quite true. In 1714, facing a real need for technology to save lives and protect commerce, Parliament established the Longitude Prize for navigation solutions which enabled vessels to determine their location on the ocean with accuracy. Backed with today’s equivalent of £15m, it gave various awards to various people who contributed parts of the solution, most famously John Harrison, who made a cheeky £3m-equivalent out of his work.

Three hundred years later, we have incomparably easier ways to communicate, collaborate on and evaluate ideas. Given the challenges we face as a country and as a planet, there’s a tremendous opportunity to make crowdsourcing really work here and now. But it will take courage, patience, and a process which taps into the varied time and talents of the crowd, in its widest sense.

19 comments on “Where do the good ideas go?”