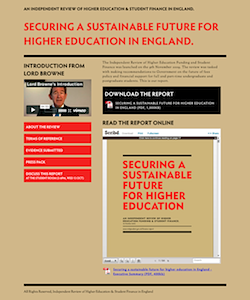 One person who’s been doing this for a while is Jenny Poole, Head of Digital Engagement at the Department for Business, Innovation and Skills. She’s a former team member, and now client, of mine, but I’m not embarrassed in the slightest to add her to my pantheon of digital heroes and heroines on this blog.

At yesterday’s Word Up Whitehall event, she introduced herself as a former speechwriter and came clean about her lack of technical nowse – asking why they don’t just sack her from the digital team. The fact is, these teams need bridges to people in the rest of the organisation in communications and policy functions, and as her new boss says, every team should have one.

Take this week as an example. Lord Browne’s independent review of Higher Education finance has been supported by a dedicated secretariat in BIS for the past few months. As the date of publication neared, the team were commissioning designs and planning the launch, and had a five-figure proposal on the table for a new WordPress site to promote the report.

Jenny told them there was another way, and figured out how.

Together, we tidied up the existing WordPress site, and in a couple of hours, built a static page for the report itself, using a bit of TypeKit magic to tie the online typography into the offline design. Jenny co-ordinated me and various other technical colleagues – basically the equivalent of herding geek cats – into a solid plan for scaling up a site which saw a 25-fold spike in traffic on launch day, with headline coverage in all the mainstream media. Still, she was up at 6am to make sure it worked.

Better still, she planted the idea of an online Q&A on The Student Room in the mind of Lord Browne, which became one of the best examples I’ve seen of that discussion format, and which Lord Browne seems to have enjoyed.