Once upon a time, I managed a team who were struggling to crack a tough problem. They needed to improve the dreadful user experience of a major online transaction, but the ‘owners’ of the transaction – a ‘partner’ organisation, in Government-speak – refused to let them have access. The ‘owners’ talked about the extensive user testing they had already done. My guys asked to see it. The Comms people said the IT people had it. The IT people were too busy building the transaction and frankly, digging out that email would put the project in jeopardy.

My guys would ask nicely if they could test the application. The offered to bring in the team nominally responsible at the heart of government. In a rare moment of weakness, the transaction owners offered a 60 minute demo in their far-flung office, but no hands-on access. The deadlines crept nearer and nearer. The emails became more colourful. Worried submissions started to make their way to ministers (who frankly had shorter-term horizons).

At this point in the story, I’d like to point to a dramatic denouement where the resistance crumbled and the heroes triumphed, but the truth is duller and more common. There was a lot of bad feeling, something a bit shit went live, and an unknown number of customers were annoyed or confused. 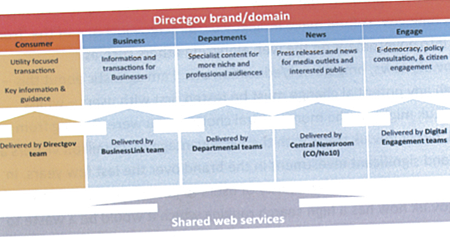 So when Martha Lane Fox recommends a single front end for transactional online services, giving Directgov the teeth to mandate standards and experiences, I say hurrah. That Directgov hasn’t been able to properly assimilate online transactions in terms of user experience and technology, as well as branding, is a critical weakness and a source of shame to those of us who were involve in its early development. Fixing that will take enormous political and administrative muscle, and tremendous technical talent, but it can and should be fixed. Opening up access to the underlying business logic and data through (secure) APIs and syndicating content to third party sites is similarly right, and probably quite a bit more challenging.

Where I think Martha’s wrong is in centralising content management and the user experience full stop. We’ve lived with web convergence and a single-domain (well, supersite domains) for a while now, and that works to a point. At best, it’s a seamless integration and quality check; at worst, it’s a pleasant fiction that does no harm.

But she’s gone further than Varney did (retyped from the published, scanned PDF):

Recommendation 3: The model of government online publishing should change radically, with a new central team in Cabinet Office in absolute control of the overall user experience across all digital channels, commissioning all government online information from other departments

The proposed model would see ‘Departmental experts’, presumably policy owners, producing content on commission from the central team, who would manage a ‘shared, agile, cost-effective suite of web services’ to publish it via a single domain, perhaps using departmental subdirectories for navigation.

Now, I’ve been proliferating government websites for some time,  it’s currently part of the way I make my living, and the recommendation above is likely to render many former colleagues and friends redundant in due course. None of which are valid reasons to reject a good idea, so I’m trying hard to manage the inevitable conflicts in my reactions.

It’s true that there’s plenty of bad practice across the government web estate, and plenty of opportunity to join up and adopt common infrastructures. Though government speaks to many audiences, it doesn’t do so consistently well. And there aren’t the meaningful incentives or threats to those who do it well or badly to lead them to improve.

It’s quite possible I’ve misinterpreted elements of the admirably concise report, but I’m struggling to see how this model will work in practice:

There are definitely some opportunities, and it’s encouraging to see ideas from outside as bold as this, with an early indication of support from Ministers. What might well make sense would include:

It’s easy to be critical from the sidelines, and I don’t want to fall into that trap. There’s much to like in Martha’s report, and a real opportunity to make things better. If it’s done right.

For ease of reference, I’ve uploaded OCRed versions of the two documents here to improve accessibility and quotability: 30 comments on “A window on the wormery”