5 Dec: Now, this is a bit niche, but actually rather handy. Say you want to group together a bunch of people on Twitter and view their tweets as a group – you set up a List, right? But what if you want to load that list into a dashboard or feedreader, or generate a daily email digest of their tweets – you might grab the RSS feed and put it into Netvibes or Feedburner, right? Sadly, Twitter doesn’t offer such a feed. 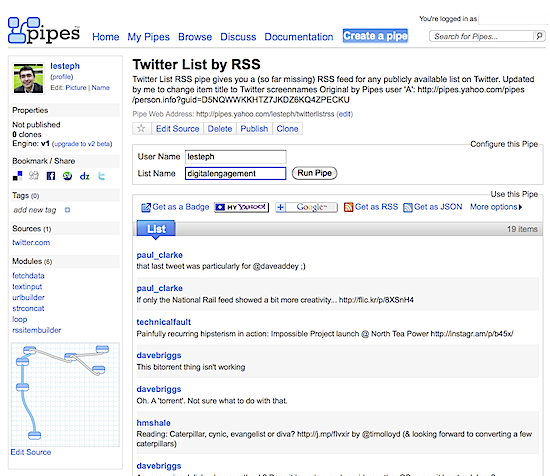 Enter Yahoo Pipes. A clever soul has created and shared a Pipe which takes a Twitter username and listname (like ‘lesteph’ and ‘digitalengagement’) and generates a feed of that list (and not just an RSS feed, but all the many outputs formats you can get a Yahoo Pipe in). I’ve cloned it and tweaked it slightly to make the titles more useful so they show who’s tweeting:

Say you have six ministers who tweet – you might build a list of them, get the RSS feed using this tool, and add this as a widget to your iGoogle dashboard or WordPress blog, so you can follow their thoughts. Or your top 20 stakeholders or press correspondents are tweeting their news: put the RSS feed for that list into Feedburner, and your Press or Stakeholder teams can get an automatic email digest once a day so they know who’s said what. Of course, you don’t have to use my Pipe – feel free to clone and adapt. 24tips: can your site handle the load?

24tips: the basics of natural SEO