The Ministry of Lorem 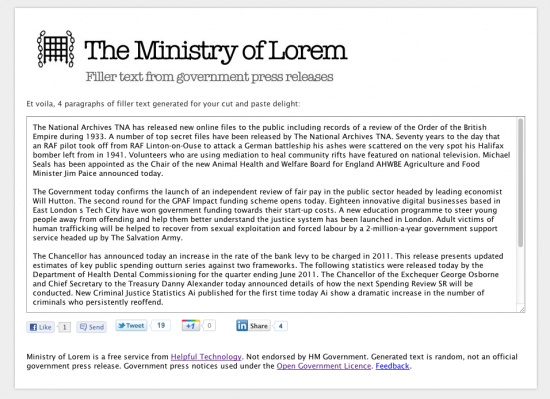 I saw a post on Kottke.org linking to HipsterIpsum, a filler text generator which instead of the usual fake Latin (lorem ipsum dolor sit amet etc), uses terms beloved of hipsters:

You get the idea. There are plenty of other Lorem Ipsum alternatives out there, from Futurama to Jules Verne. But I do a lot of corporate/public sector work, and putting ‘pitchfork photo booth fuck’ in my comps would raise eyebrows, and not in a good way. What I need is filler text about corporate public sector stuff.

So I knocked up Ministry of Lorem. It grabs the latest press releases from about a dozen central government departments who publish usable RSS feeds, cleans up the first line a bit, randomises the order, and generates as many paragraphs of text as you need. Oddly mesmerising stuff:

The following statistics were released today by the Department of Health The monthly data published today gives the waiting times for 15 key diagnostic tests carried out in the NHS. The Government has today announced that it will review the case for amending the taxation regime for remote gambling. More people than ever before are being successfully prosecuted for committing intellectual property crime in the UK according to a new report published today.

There are many career opportunities within the Armed Forces but there is only one job that you have to know how to do before you enter service. Vulnerable crime victims across England and Wales will benefit from 30m of Government funding over the next three years Justice Secretary Kenneth Clarke announced. Offenders are helping spruce up a Lancashire country park ahead of a visit there by Prince William and Kate Middleton.

On this page you can download the 2011 Budget document either in a complete PDF or individual chapters. The National Archives TNA has released new online files to the public including records of a review of the Order of the British Empire during 1933. The competition for places in the prestigious Civil Service Fast Stream will go live on 19 September.

It’s mainly silly. But I’ve lost count of the times I’ve Googled ‘Lorem Ipsum’, gone to my favourite generator, scrolled down a bit, generated some text, and then copied and pasted. At least with my new toy, I can just hit http://ministryoflorem.com/5 and, voila, get 5 paras of gripping filler text certain to send journalists across the land into a frenzy. 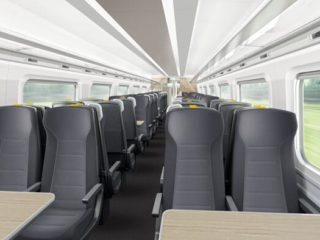 5 comments on “The Ministry of Lorem”