Just a quick post to flag a little site launched last month for a modest and little-known public figure, reported to be the first Briton to give £1bn to charitable causes, and the third longest-serving minister of the New Labour years. 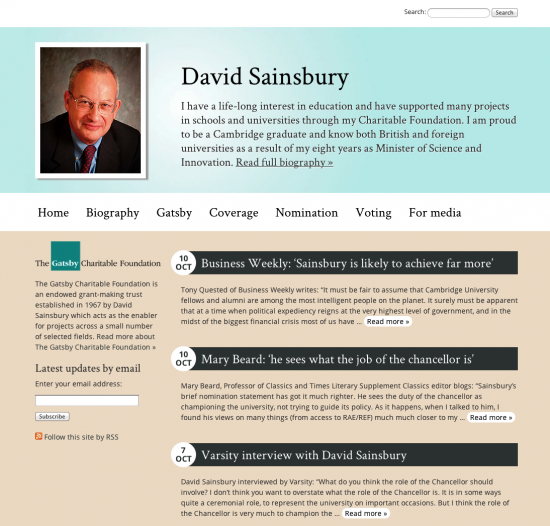 Lord Sainsbury of Turville was nominated earlier this year to succeed Prince Phillip as Chancellor of Cambridge University. For the first time in over 160 years, this appointment has been contested, and he faces Brian Blessed, Michael Mansfield QC and a local shopkeeper, Abdul Arain in the election. Voting takes place this Friday and Saturday… but don’t reach for the Cambridge website. Eligibility to vote is quite restricted (to holders of Cambridge Masters degrees) and votes must be cast in person, in Cambridge. Wearing a gown. Few people are confident about predicting the outcome.

The site I built for him isn’t a campaign site in the traditional sense, though it does set out his approach to the Chancellorship and how he would fulfil the role. He’s been accused of being behind the times in terms of the sophisticated digital campaign waged by Brian Blessed in particular, though in fairness this isn’t a normal kind of political election for an executive role, nor the kind of contest you’d expect to see for one.

There’s a nice post from Cambridge Classics Professor Mary Beard, who has come round to supporting Lord Sainsbury, after initially considering the other candidates:

So what should the Chancellor be doing? Probably, if not a royal, rather more than Prince Philip could do, in his position. But it should be an enabling role, not a politically directive one. I am looking for someone who might help in opening up the space for us to discuss widely the role of the university and educational priorities with government, funding bodies, and the media — and who might help us get across our aims and policies better. Not someone who wants to tell us what those policies should be.

That is where Sainsbury’s brief nomination statement has got it much righter. He sees the duty of the chancellor as championing the university, not trying to guide its policy.

As it happens, when I talked to him, I found his views on many things (from access to RAE/REF) much much closer to my own than I had expected. And that is, if I’m honest, what adds a little enthusiasm to my vote. But it’s not what actually commits me to voting for the guy in the first place. The key thing, for me, is that he correctly sees what the ‘job’ of the chancellor is.

I’ve aimed to create something tasteful and flexible, starting from a brief to develop a site which takes a conventional Wikipedia page a little further. It’s WordPress-based of course, without any hugely radical innovation under the hood (though it has the distinction of being the first HTML5 template I’ve worked on, and my first significant use of Google’s Web Fonts). We’re running a small paid search campaign to route interested visitors efficiently, and using Feedburner as a very simple email alerting mechanism.

So I’m rooting for Lord S, who, from what I’ve read seems like the eminently sensible and capable choice for this role. And speaking as an Oxonian, the poor Tabs clearly need all the help they can get…