Walk a mile in our sandals 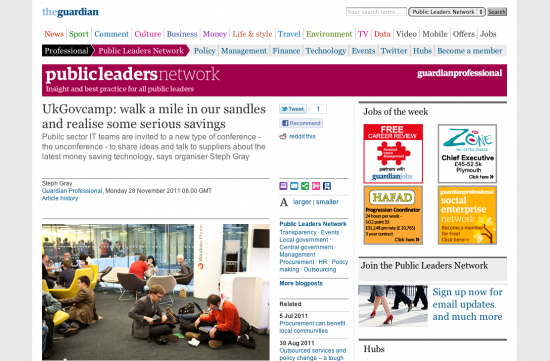 I’ve written a piece for the Guardian’s Public Leaders Network on UKGovcamp, as part our plan to broaden the reach of UKGovcamp in 2012:

Informal, social-media driven events like UKGovcamp and the recent WordUp Whitehall have an important role in bringing together SME suppliers, open source specialists and government digital teams to share practical experience and make connections. Participants in the January 2011 UKGovcamp heard a presentation from Defra, which had recently replaced a static 20,000 page corporate website with an open-source platform based on WordPress, working with long-term Govcampers, Puffbox Ltd. Since then, a trend has emerged with the Departments of Health and Transport joining them. DfT alone recently calculated savings of £150,000 per year on CMS licences and a 70% reduction in hosting costs.

One public sector IT conference is much like another. CIOs from large organisations talk about the impact their innovative strategies are having on the bottom line. Vendors talk in buzzwords about their new ‘turnkey’, ‘as-a-service’, ‘2.0 products’. Panels of shining case study speakers talk about the successes they’ve achieved… though you come away somehow unsure how to emulate it. The coffee’s OK, the company is passable. It’s a day out of the office.

UKGovcamp isn’t like that. It’s an ‘unconference’, or a free-to-attend event without a predefined agenda, where the sessions are proposed and agreed at the start of the day. They’re written on scruffy post-it notes and added to a big grid on the wall. Govcamp participants consult the grid throughout the day to work out where they want to go next, and there’s plenty of time for the informal hallway chats which, let’s face it, are the best bit of any conference. The so-called Law of Two Feet applies: people move freely between sessions which interest them, tweeting, blogging, snapping pictures and filming as they go. What emerges is always a high-energy, dynamic event which leaves people buzzing with new ideas and connections for weeks afterwards, because they’ve been talking and hearing from their peers inside and outside the public sector, rather than listening to the great and good.

The first UKGovcamp took place in January 2008, initiated by Jeremy Gould, a civil servant from the Ministry of Justice. The 2012 event – the fifth in the series – will be the biggest yet, with around 250 participants over two days. For a second year, Microsoft UK are providing a venue for the event at their London Customer Centre, keeping the Govcampers in food and wifi, and taking the jibes about Internet Explorer and Windows with good grace.

The 2012 event is shaping up to be a new style of Govcamp, following up the traditional mix of presentations and discussions with a new ‘Doing Day’, where participants work on practical solutions to the issues being discussed. Nobody knows quite what will emerge, though it may involve the hacking together of new web apps, collaborating on writing policies or strategies, or training colleagues in new skills.

Govcamping has grown into a year-round movement of smaller events (think: LibraryCamp, Shrop(shire)Camp, Localgovcamp) as well as monthly, informal ‘teacamp’ get-togethers in London and Birmingham where the talk is of social media and the new public sector IT, amidst the tea and Victoria sponge (none of it publicly funded).

If this all sounds a bit hippy and Californian for a UK public sector audience…. well, come and walk a mile in our sandals. The combination of tight budgets, consumerisation and socialisation of enterprise IT, and politicians’ expectations of digital-by-default public services has clearly shaken things up in the last couple of years. The Cabinet Office is leading perhaps the most credible effort in a decade to bring more open source and cloud-based tools into the public sector, tackling the gnarly barriers of procurement, open data and IT security head-on (their open data team are submitting a regular blog to the Public Leaders Network).

In this turbulent new environment, the informality and openness of govcamps are the key to their success. By leaving job titles at the door, mixing people from different sectors with different agendas and experience, they become a source of contacts, inspiration and good old-fashioned moral support which promises to help deliver real change in public sector IT.

This article is published by Guardian Professional. Join the Guardian Public Leaders Network free to receive regular emails on the issues at the top of the professional agenda.