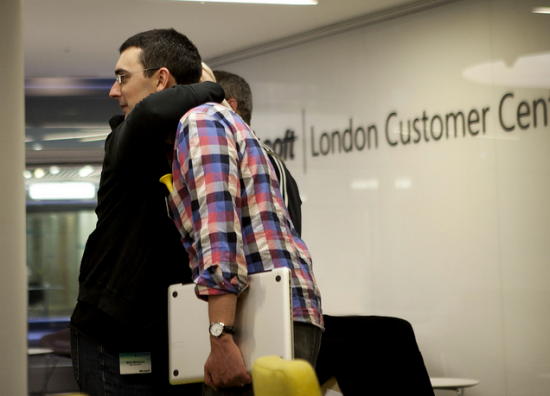 It’s been 18 months since I last walked the mean streets of Westminster as a civil servant. There are things I miss about the old lifestyle: having the scope to run with projects on the ‘inside’, being in the loop on the latest goings-on in government, and most of all, having a great team around me.

I blogged in May about the experience of the first year of going freelance. So mainly to cheer myself up as I bash away at this lonely laptop while web teams around Whitehall stagger back from convivial Christmas lunches, here are my stand-out memories of 2011:

1. Visting The Guardian with Tom Loosemore and the Heads of Digital in the January snows: my first glimpse of Mike Bracken as a cheeky little fact-finding expedition I set up to Kings Place got a vision of things (and as it turns out, people) to come. Government has lots to learn from The Guardian’s ‘mutualisation‘ strategy, for instance.

2. Following the UKGovcamp & Mailcamp buzz: a big ol’ Govcamp even by global standards, made possible by the team at Microsoft, the inimitable style of Dave Briggs, and a list of sponsors who funded 10 more events and kept the buzz going through the year, including a surprisingly interesting afternoon about email. 2012 looks like there’ll be more of the same, with at least as much in the pot to support more events – and we’re going to be talking email again too.

3. Helping the ‘puffer fishes’: in March, I helped the team at public participation specialists Involve to relaunch their site in WordPress, enabling them to reinvigorate their blogging and make it easier to achieve what they’ve termed the ‘puffer fish’ effect – amplifying the impact of a small, talented team. In May, University Alliance did the same. And in September, Lord Sainsbury put across his vision for the Cambridge Chancellorship with my first little foray into HTML5 – which was probably the clincher  in his narrow victory, I suspect.

4. The Dads & iPads: in the still-early days of the Single Domain project, Simon, Neil and I huddled round a pedestal unit in COI’s Hercules House, trying to figure out what digital engagement might look like as part of the Alphagov project. We didn’t crack it, but a brains trust which came together a few months later helped the ideas along the way, and hopefully we’ll start to see some concrete outputs, and more critical friendship, in 2012.

5. The first commercial outing of The Social Simulator: the Social Simulator platform gives teams realistic experience of the tools, norms and force of the social web, and in 2011 we put dozens of people from emergency services to retailers, transport companies to government press officers through their paces, hitting them with crisis scenarios amplified through Twitter, Facebook and online media. The first big outing of the platform in April was one of the most high-pressure days I can remember, terrifyingly real – and lots and lots of fun. I’m hoping to ramp up the Social Simulator element of Helpful Technology’s work in 2012, including growing our work with emergency services via a new partnership with Likeaword and some social media shenanigans at British APCO 2012.

6. The launch of The Collective Memory: this little service for the British Science Association collates evaluations of public engagement projects around science – there are some neat little touches which deserve a proper blogging one of these days (CSV data downloads, embeddable widgets, front-end user profile management etc), but I mainly remember the late nights learning WordPress’ new custom post and taxonomy functions. If you think WordPress is really a blogging tool, think again.

7. Training the Press Officers: for over a year now, I’ve been part of the team delivering social media training to central government comms teams, alongside my partners-in-crime Simon and Giles from Claremont PR with help from Dan Slee, Dave Briggs and Tim Lloyd. We’ve had some lively sessions on digital engagement, social media PR and using Agile techniques to manage digital projects, but perhaps the highlight for me has been seeing the enthusiasm of press officers – often kept too busy (or sometimes too afraid) by their senior managers to think about the landscape they find themselves in – discovering new tools and techniques and starting to use them.

8. Seeing the Department of Health homepage: in August, the Department of Health switched its main corporate site to WordPress. I have to be somewhat cagey about my involvement for contractual reasons, but let’s just say I was chuffed. The team at DH are, basically, in the zone digitally-speaking right now, turning an oil tanker of a publishing operation into a nimble frigate of engagement, or more accurately, a flotilla of frigates, all guns blazing. I’ll stop now.

9. Getting AAA certification for a WordPress site from Nomensa: in November, work I’d done with DCMS for the eAccessibility Forum went live, including a version of a WordPress theme tweaked to meet the requirements of AAA accessibility, which I talked about at Simon’s inspiring second WordUp Whitehall gathering.

10. Relaunching the FCO blogs: blogging is about more than software, but shifting the FCO’s blogs to WordPress (and pursuing my own daft point of pride by migrating 70+ blogs and building a Disqus exporter as part of the project) makes new things possible and old things easier. To quote the Single Domain mantra – the new platform takes the ‘faff’ out of the process, and showcases the incredible stories of our diplomats in more pictures and languages.

Anyway, enough of the smugness. Time for a mince pie, and a raised glass of mulled wine to the clients and associates who’ve made 2011 a corker. Hope you have a Merry Christmas and a great 2012! 2 comments on “The year of living helpfully”