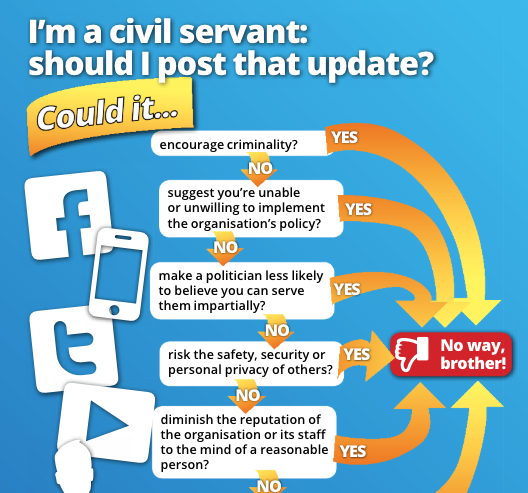 The Teacampers were on good form (and vast numbers) yesterday, to discuss the vexed question of social media guidance for civil servants which the GDS Digital Engagement team are currently drafting. It’s to their great credit that Emer, Lou, Jane and colleagues are developing the guidance in the open, in consultation with those inside and outside government who have an interest or experience. It’s a tough challenge too – my contribution was to suggest that maybe we need several different things, rather than a single one (which others have struggled to compile before – it quickly becomes a social media training manual or digital engagement strategy when you put finger to keyboard…):

Still, my contribution to #4 is Helpful Technology’s first venture into infographics (not a proper one, I know but in the same visual style), in the form of this eight question flowchart to help you work out whether the pearl of wisdom you’re about to tweet or post is le mot juste or beyond the pale. It’s a minimum set, and would allow people to tweet about bad days or things that they’re struggling with, while avoiding the things that harm the ability of government to work. See what you think.