What holds people back?

What holds people back from using digital tools and techniques at work? Is it that they need someone to tell them what Twitter is for? Or is it that they couldn’t tweet if they wanted to: the system would block it and their boss would look disapproving. Maybe the Press Office runs a tight ship on the corporate channels and other people don’t know or dare to do it themselves. People are busy, and maybe it’s not something that bosses prioritise. Perhaps it’s harder to procure developers happy to work from a backlog of user stories than a big firm good at filling in PQQs and completing status reports.

There’s lots of talk in cool policy circles of wicked problems, with shifting dimensions and interlocking effects, and to an extent, digital skills fit that definition.

I started the week with a senior group of public sector leaders keen but uncertain about their role in helping their organisation engage digitally. When they intervene in internal discussions, those conversations tend to close up. Though many of their people might have the aptitude and credibility to build Dave Throup-like followings, they feel they are just a bad tweet away from serious stakeholder problems, not just some personal professional embarrassment. And yet by not engaging, they’re having to watch bias and misinformation play out in the media. It feels like a situation in which to take baby steps, launch some plucky pilots and build confidence.

Then yesterday I visited the DWP Digital Academy, now in week two of its first eight-week programme, where it’s a different story. New Digital Chief Kevin Cunnington is doing a GDS: talent-spotting to grow his own cohort of agile digital service designers and managers and tearing up the status quo (which hasn’t exactly served the organisation well in the past). They’re learning wireframing and paper prototyping, new forms of identity assurance and social media too. It’s full-on revolution not evolution, inspired and supported by GDS. In fact the Academy base in Fulham is reminiscent of the Alphagov team circa summer 2011, but with insiders rather than outsiders on the Macbook Pros – a crucial difference.

Also this week, I updated an old slide of mine from 2009, trying to apply a sort of Maslow’s hierarchy to the attitudinal progression from ignorance to excellence, and highlighting that skills training which stimulates awareness won’t change outcomes unless the other steps in the journey – IT access, formal permission, personal relevance – are also addressed: 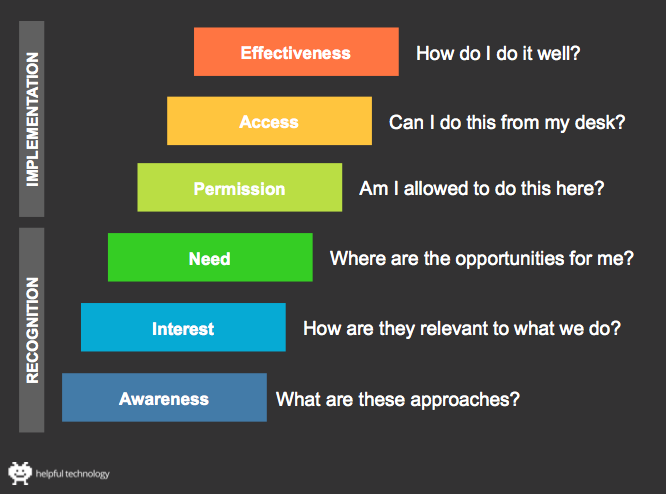 This certainly fits the situation of that senior team I met. But watching the DWP group at work, it struck me that really there are just two things needed to get change going in large organisations: attitude and critical mass.

Attitude picks the fights, and critical mass wins them.

You need individuals unwilling to put up with bad ways of doing things and confident that there is a better way. People with a curiosity about users and courage to share and network with people they don’t know. But you also need to build a large enough group of these rebels that their energy can be harnessed, opportunities taken, occasional failures accepted, and the crucial sense of inevitability created.

The DWP Digital Academy promises to deliver against both of these, which is what makes it quite an exciting vision. It will be interesting to see what happens next.