Here’s a conversation that I have quite frequently during training courses when we play Dave Briggs’ evergreen Digital Engagement Game:

Me: So, tell me how you’ll implement your plan…

Team: Well, we’ll [do creative stuff with social media] and work with our stakeholder group to get the message out to the audience.

Me: So, are your stakeholders usually helpful in doing that kind of thing?

Team: No, they’re pretty patchy to be honest. Some don’t help at all. In fact, we realised that a few of the umbrella groups we deal with don’t actually have contact with many of the people working in the field: it’s always the same old voices. People in the sector haven’t even heard of those groups sometimes!

Me: But that’s still how you choose to get things out to the sector?

Team: Yes. We always do things through stakeholders.

Here’s the thing: social media is about people talking to people, sharing the things they like and getting troubles off their chest.

The #icebucketchallenge wasn’t spread through stakeholder forums. Industry representatives aren’t exactly thrilled by Uber or Airbnb. Viewed from the other side, I’ve been a member of the NCT for six years but they’ve not asked me as a Dad what I’d like them to lobby for on my behalf. I run a small, fast-growing technology business but the FSB or TechUK have never invited me to join.

Working through umbrella groups and representative organisations ranks along with TV advertising and local newspapers: sensible twentieth century reactions to the challenge of mass marketing and imbalances of power between organisations and individuals. They’re still relevant now, but less so and frankly while the advertising and local news industries are working hard to avoid being disintermediated to extinction, the same doesn’t appear to be true of the so-called representative groups.

I’m not trying to argue that public servants shouldn’t work with stakeholders – those groups have infrastructure and organisational memory and agility which government needs. Social media makes it possible for policymakers to talk directly to the niche audiences they want to speak to. But it takes some lateral thinking, and a willingness to go and find interesting people beyond those – surprisingly small – umbrellas.

There’s an opportunity that lies somewhere between talking-to-stakeholders and crowdsourcing-from-the-masses, which involves civil servants using digital tools as individuals and small teams to seek out, join and become part of online discussions in niche areas, like Viv Bennett does with #wenurses or Defra and BIS have done with #agrichat. Building those relationships takes time, commitment and mutual respect of course, and an appreciation that there’s plenty of drivers on The Student Room and entrepreneurs on Mumsnet. Don’t get put off by those who dominate the open mic sessions – seek out the rest, tune into the quiet majority with jobs to do and families to look after and build your own representative networks of the unrepresented, so that you can set the views from the umbrella groups in context. After all, ‘Why Wasn’t I Consulted?’ is the fundamental question of the web.

Ask me a simple, straightforward question or two about my experiences or priorities as an entrepreneur or a motorist or a dad, and I’ll probably answer it. I might even pass it onto my friends. 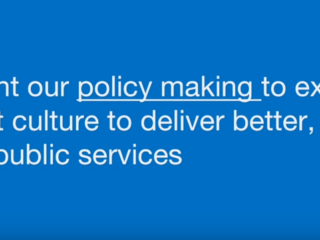