Taking a cue from Matt Jukes and others, here’s some of my abiding memories of 2016, in pictures:

Took a bit more time to think and let things percolate on my daily commute into London. Tried looking for answers to Why (which I struggle with), as well as How (which is where I’m more comfortable). Found a few.

Dawn over the City is still pretty special

Bowie died and Mrs G had a milestone birthday so February was pretty space-themed. I made a scary cake. 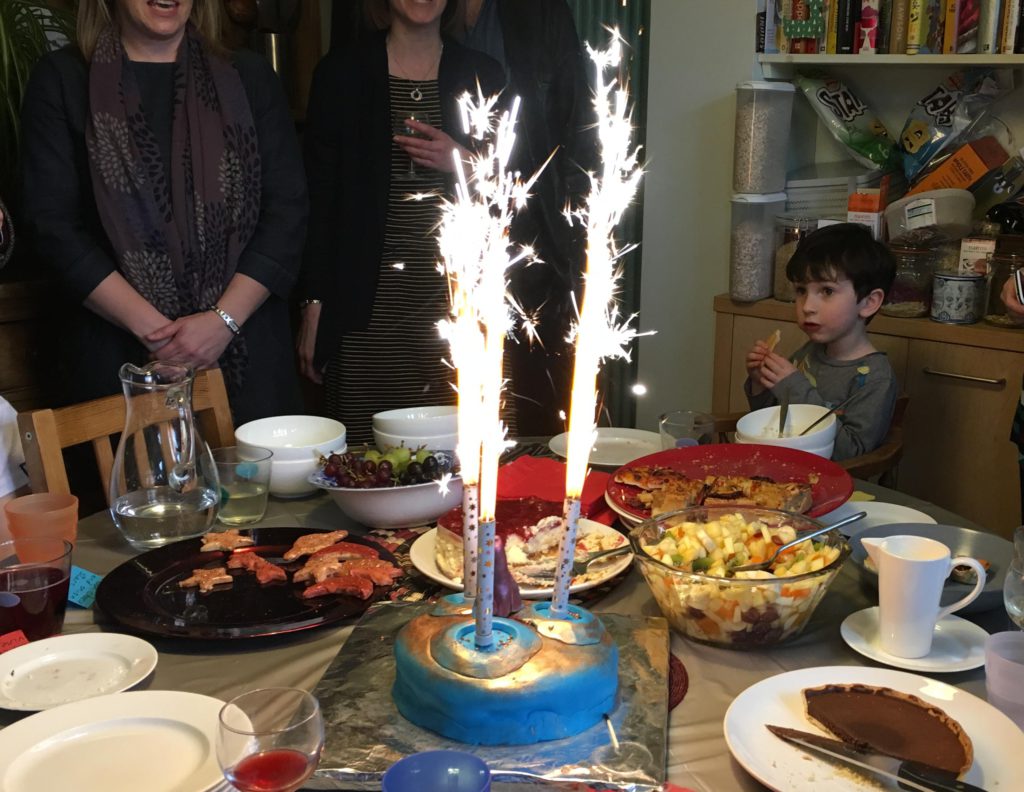 Got up early a few mornings and had Cromer Beach and Three Cliffs Bay to myself.

Scenery worth getting up early for #wales #nofilter

Watched Gray Jr get really into coding, trying not to look excessively pleased about it.

Went to the seaside a few times to reflect and catch up with old friends (both of which I should do more).

Away day at the Friends Meeting House in Brighton, including 15 min silent reflection at the beach

Worked as part of a genuinely nice team, doing interesting and varied work for clients who care. It’s hard to go from freelancer to leading a small business and I’ve had ups and downs this year, trying to shape a business that I’m proud of and work out my role in it. Got surprisingly into meetings, development plans, pensions and IT security.

The combo of open sharing and gentle competition is pretty unstoppable, in comms as in life: https://t.co/fyBBmFIF3l

Wandered around Venice Beach and Beverly Hills (after a passport near-miss). Hummingbirds, live gig at The Troubadour, Ubers everywhere.

Out and about in Beverly Hills

Flew Business to Dubai in Ramadan and got a glimpse of expat life.

Getting lunch during Ramadan: hunt around the sensitively screened-off cafes to find the non-Muslim clientele

Had a day of chuckles and ice cream (but no booze) in Milan thanks to a drinks brand.

Without getting all #blessed about it, this week ends well…

Mourned Brexit and Trump but more in a saying-bollocks-rather-than-crying-my-eyes-out way, if you know what I mean.

Dammit, first time the graph's looked like that.. https://t.co/CL1yXyUedh pic.twitter.com/UrjZGZVq0y

Got quite into the Euros with some back garden footy (Gray Jr still coding).

Did less blogging and tweeting, mainly because I don’t stay up late like I used to and have drifted away from the government IT scene a bit. It’s harder to blog if you do it less frequently though, and I miss the time spent reflecting on work as well as doing it.

Got quite excited as our new family office in the loft took shape and most of the remaining grungy areas of our house got sorted (eight years after moving in).

Had my share of late nights and early mornings simulating things from plane crashes and marauding gunmen to battery leaks and celebrity walkouts. First foreign language exercises in Arabic and German. Learned Cameroonian geography and slang words. Photoshopped a lot of weird shit.

Limbering up for running a remote crisis simulation in a different time zone. Counting on powering through with Waitrose cheese thins and squash.

Went to places you hardly ever go for work. Here’s St John’s, Newfoundland.

Sat in Midtown boardrooms and coworking spaces planning the incorporation of a new US business in 2017. Went from pipedream to Gantt chart pretty quickly.

None too shabby #workingwindow on the 45th floor today, plus an intriguing star spot of George Osborne in the lobby…

Made madeleines with my team at our Christmas outing (we identified cake, karaoke and quizzes as the things that bring Helpful HQ together).

Hung out with my best mates, now more fun than ever.

Should you learn to code?